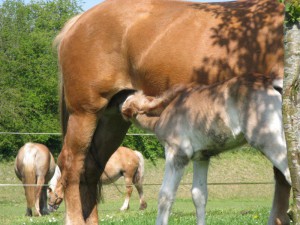 Haflingers are originally from Austria and South-Germany. Because the race is quiet sober, they were mostly used as draught- and packhorse in the mountains. There they are also frequently being used for horse-sleight riding. The Haflinger is fox-coloured with a light tail and manes. All colors of fox are allowed. The height is between the 1.35 meters (13.1 hands, 53 inches, 4ft5) and 1,50 meters (14.3, 59 inches, 4ft11). The Haflinger is an intelligent and eager to learn horse with a friendly character. The Haflinger is a reliable friend for life!

A Haflinger is sober in maintenance, which means, they can stay outside the whole years, summer or winter and needs less food then a pedigree horse. By the adding of Arabic blood, the Haflinger obtained noble characteristics. In the year of 1961 the first Halflinger was brought to the Netherlands, after which the race has proven itself to be very allround.

The Haflinger is a fine rigging and riding horse. In the Alps ìt is being used for the horse-sleight. Furthermore you can use a Haflinger for all sorts of things, like training and jumping too. Only you cannot expect that you will reach highest top-class. The Haflinger is very suitable for little children who want to learn horseback riding, they are quiet, calm and have an easy going.

* You will see the Dutch packaging unit on the picture.

* You will see the Dutch packaging unit on the picture.